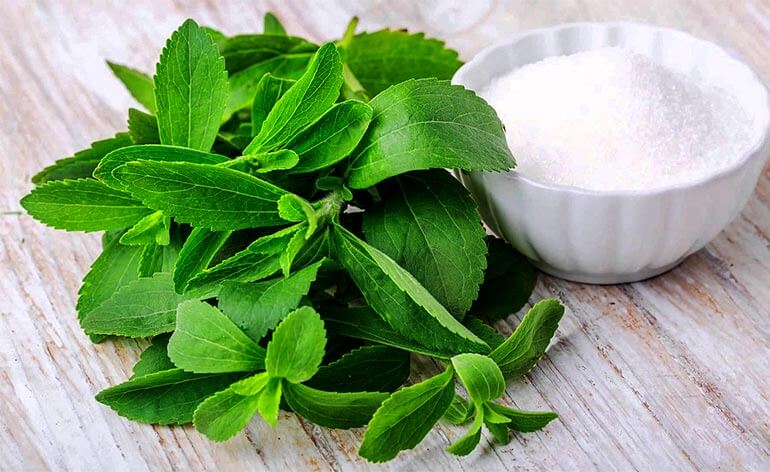 All the magic and goodness of nature fuse together in the form of a miracle called Stevia. A part of the Chrysanthemum plant genus, Stevia is chemically known as Stevia Rebaudiana Bertoni. This marvelous herb is a naturally occurring herbal non-toxic sweetener with zero calories and absolutely no carbohydrates.

Constantly used by ancient civilizations and wise men across the globe, the wondrous Stevia plant is a natural sweetener and has been known to cure a number of ailments like fever, stomatitis, headaches, asthma, thirst, tuberculosis and caries of the teeth. Stevia is known as ‘Ka’a He’e’ or the Sweet Herb in Guarani, the native language of the tribal populous in Paraguay and Brazil, who have used Stevia’s leaves as a sweetener for centuries.

The presence of Stevioside and Rebaudioside in Stevia gives it a distinctive sweetness. This natural sweetener is approximately 300 times sweeter than the chemically formulated sugar. Born out of the elements of nature, Stevia is completely safe for people with diabetes and due to the fact that it has no calories it is a great alternative for people that are health conscious.

The World of Stevia
Recipes
Now your recipes can be Sweet and still leave you without health issues. Get your sweet  tooth out of its hiding and dig in…

The Benefits of Stevia-

While Stevia is very popular as a natural sweetener, few people would know of its miraculous healing properties in the treatment and control of a host of common diseases. It is especially useful in the treatment and management of diabetes and hypertension (blood pressure) and is well known as a plaque retardant. Please read on for more detailed information and do feel free to write in to us should you have any questions.

According to WHO, about 300 million people will suffer from diabetes by 2025. Studies reveal that about 2 people in the world are affected with diabetes every 10 seconds with India leading the way as the diabetic capital of the world.

The ailment of diabetes is caused when body does not produce or properly utilize the insulin produced. Consequently causing gangrene, amputation, adult blindness and end-stage renal disease (ESRD), diabetes is responsible for affecting the lives of millions of people around the world. Diabetes mellitus is categorized by regularly high levels of blood glucose (sugar) in the human body. The body has to be able to sustain the blood glucose levels in a narrow range, which is done by the elements of insulin and glucagon. The continually high levels of sugar in the body can cause kidney failure, cardiovascular problems and neuropathy.

The ever increasing endemic of diabetes can be controlled by the incredible Stevia plant. Research conducted by Dutch and Japanese scientists in 2003 have revealed that continuous intake of Stevia, induces the beta cells of pancreas to produce more insulin. This in turn reduces the dependence on oral as well as injectable insulin and controls diabetes.

Sugar rich products have become a way of life and over the years have permeated all levels of the food processing industry. However sugar is responsible for teeth decay and in highly concentrated forms reduces the effects of other herbal elements. The naturally occurring Stevia plant is 250 to 300 times sweeter than sugar and possesses anti-bacterial properties that removes plaque while improving the overall condition of the teeth. The remarkable characteristics of Stevia make it ideal for use in toothpastes and dental powders as well as an alternative for sugar in food products.

A creation of remarkable natural components, the Stevia herb possesses the capacity to cure a range of ailments and keep health problems at bay. Diabetics have been known to suffer from hypertension which in turn further aggravates the decline of health. The extraordinary healing trait of the Stevia plant enables it to treat chronic hypertension and improve overall health.

As a Digestive Supplement:

The indigenous people of Paraguay have used Stevia for centuries for improving digestive and intestinal functions. Capable of calming the stomach when upset, Stevia also assists in a swifter recovery from minor disorders.

The incredible antiseptic properties of Stevia allow it to be used on the skin as well. Protecting the skin against ageing, Stevia also removes acne and protects the human skin from various other skin problems. The antibacterial property of the Stevia plant makes it extremely efficient for treating cuts as it accelerates the healing period while simultaneously destroying the harmful bacteria.

Apart from having zero calories, the incredible trait of Stevia to reduce hunger pangs and satiate sooner enables it to aid the weight reduction process. The natural composition of Stevia makes it an ideal tonic for reducing weight.
Controlling Addictions:

According to some research on Stevia, the all natural Stevia plant and its extracts reduce the yearning for tobacco and its products along with alcohol and greasy food products.
Antimicrobial Property:

The anti-microbial trait of the Stevia plant enables it to hinder the reproduction of harmful bacteria along with a host of other highly contagious organisms that spur various health problems. Continual usage of Stevia results in diminished occurrences of cold and flu.

As a probable Cardio Tonic:

Though the tests and research on Stevia is an ongoing process, certain studies indicate that Stevia could be extremely effective in strengthening the cardio vascular system of the human body.

Site is Protected by DMCA